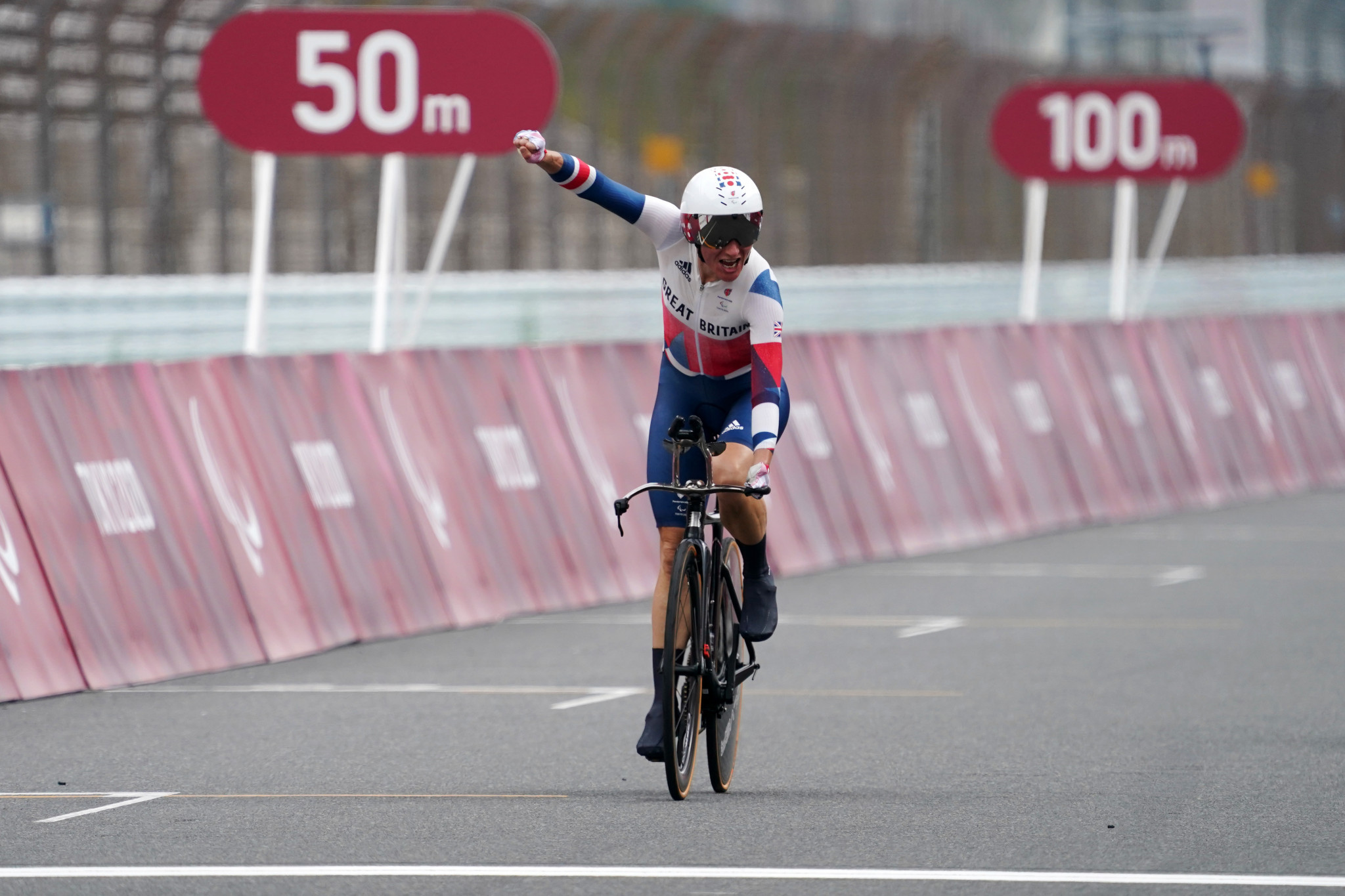 Dame Sarah Storey rewrote the record books today at the Fuji International Speedway to become the most decorated British Paralympic Games athlete in history following her win in the women's C5 time trial at Tokyo 2020.

She now holds 16 gold medals, as well as eight silvers and three bronzes.

Dame Sarah is level on golds with swimmer Mike Kenny, who also won two silver medals in the pool and has held the record gold tally for 33 years.

In today's race, Dame Sarah finished in 36min 08.90sec to stand top of the podium in front of compatriot Crystal Lane-Wright and Germany's Kerstin Brachendorf.

A win in the road race later this week would give her the unchallenged gold medal total of 17.

The United States Oksana Masters claimed the gold medal in the women's H4-5, making it the fourth Paralympic sport she has won a medal in.

Masters previously won bronze in rowing at London 2012, two silvers in biathlon at Pyeongchang 2018 and five medals - including two golds in 2018 - in cross-country skiing from the past two Winter Paralympic Games.

She won in 45:40.05 - finishing almost two minutes ahead of her nearest rival, China's Sun Bianbian.

Jennette Jansen won the bronze medal for The Netherlands.

The moment is almost here! My first words out of surgery on the 100 Days out from #Tokyo2020 was “am I ready to go to Tokyo.” I never lost sight of my goal. Thanks to my amazing support team/doctors/sponsors/coaches for helping me get to the start line in @Tokyo2020 #teamusa pic.twitter.com/o1rDVbArWp

In the opening race of the day, Australia's Darren Hicks finished with gold in a time of 34:39.78 in the men's C2, while Ewoud Vromant of Belgium and Alexandre Leaute of France took silver and bronze.

Dutch flagbearer Jetze Plat crossed the line in the men's H4 to win gold in 37:28.92 ahead of Austrians Thomas Fruehwirth and Alexander Gritsch.

Katie-George Dunlevy and her pilot Eve McCrystal were confirmed as the women’s B gold medallists after the Irish tandem crossed the line in a winning time of 47:32.07, repeating their success at Rio 2016.

Slovakia's Patrik Kuril claimed gold in the men's C4, putting down a time of 45:47.10 to lead a one-two for his country, in front of Jozef Metelka.

George Peasgood of Britain was marginally off the silver medal position, but all three medallists were far ahead of the rest of the field.

Austria's Walter Ablinger upgraded the silver medal he won at Rio 2016 to win gold in the men's H3, crossing the finish line in a winning time of 43:39.17.

It is his second Paralympic title following his success in the road race H2 at London 2012.

Alexandre Lloveras of France became a Paralympic gold medallist for the first time, in the men's B in road cycling.

He finished fourth in the men's individual pursuit on the track at Izu Velodrome earlier in the Games, but could be upgraded to bronze after Poland's Marcin Polak tested positive for a banned substance.

Vincent ter Schure of The Netherlands was six seconds adrift of Lloveras' time of 41:54.02 for silver and Christian Venge Balboa of Spain won the bronze.

Mikhail Astashov of the Russian Paralympic Committee finished the men's C1 in 24:53.37, with the top three separated by just five seconds.

Aaron Keith of the US was two seconds separated from the Russian and Michael Teuber, who could have won a record fifth men's gold in road cycling, was five seconds off Astashov for bronze.

Dutch rider Mitch Valize claimed men's H5 gold in 38:12.94, more than a minute in front of silver medallist Loic Vergnaud of France, while Ireland got a bronze medal through the efforts of Gary O'Reilly.

Britain's Benjamin Watson secured gold in the men's C3, having completed the 24-kilometre course in a time of 35:00.82.

Germany’s Steffen Warias was nearly a minute down in second, while a second German, Matthias Schindler, took bronze.

France's Florian Jouanny secured the bronze medal a distance behind the pair.