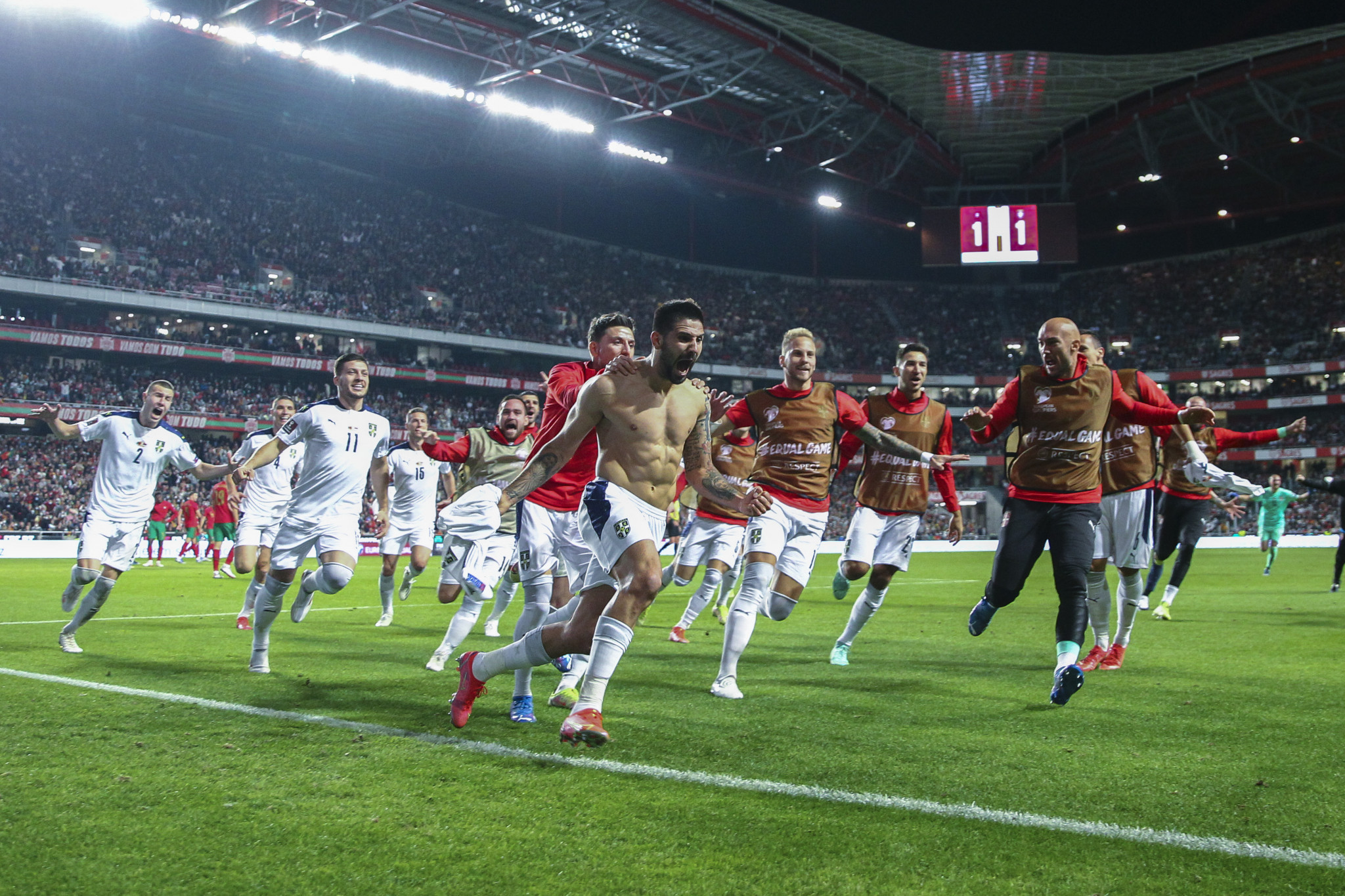 The line-up for the Qatar 2022 FIFA World Cup has begun to take shape with 12 nations having booked their places alongside the host nation for next year’s 32-team tournament.

Four-time winners Germany and five-time participants Denmark were the first nations to seal places last month after emerging as the winners of Groups J and F in the UEFA qualification process.

The remaining eight European group winners were decided in the latest round of qualifiers, which have been impacted by the COVID-19 pandemic.

Serbia produced one of the notable stories by coming from behind to beat Portugal 2-1 in Lisbon to win Group A.

Portugal had required a draw to top the group and took the lead after two minutes through Renato Sanches.

Dusan Tadic equalised in the 33rd minute after an error from goalkeeper Rui Patricio, before Serbia’s record goalscorer Aleksandar Mitrović scored a 90th-minute header to snatch top spot in the group and send Serbia to a second straight FIFA World Cup.

European champions Italy joined Portugal in the playoffs after being held to a goalless draw by Northern Ireland in Group C, with Switzerland seizing their opportunity by winning 4-0 against Bulgaria to earn automatic qualification.

The Netherlands avoided the fate of Italy and Portugal, after edging a close Group G, which saw three teams in contention for automatic qualification and the playoffs heading into the final game.

Late goals from Steven Bergwijn and Memphis Depay gave the Dutch a 2-0 win over Norway to earn a direct berth to Qatar 2022, with their opponents missing out on qualification after Turkey won 2-1 against Montenegro to finish second.

Spain, the 2010 World Cup winners, topped Group B after bouncing back from a defeat to Sweden earlier in their campaign.

The 2018 runners-up Croatia qualified after a late own goal saw them beat Russia 1-0 in the final Group H match to secure top spot in front of their opponents.

Portugal, Scotland, Italy, Russia, Sweden and Wales have been seeded for the semi-final draw in the playoffs, with Turkey, Poland, North Macedonia, Ukraine, Austria and the Czech Republic unseeded.

Only three teams will come through the playoff system, with matches to be held in March.

Brazil and Argentina have advanced from the gruelling South American qualification campaign with matches to spare.

Record five-time winners Brazil have won 11 and drawn two of their 13 matches to top the standings, with Argentina six points behind after eight wins and five draws.

Ecuador appear poised to secure third place due to their six-point cushion over Colombia and Peru, who occupy the last automatic spot and the playoff position respectively.

Chile and Uruguay are one point behind, outside the qualification places, with the latter suffering a major blow by losing 3-0 to Bolivia in their latest qualifier.

The result boosted Bolivia’s hopes of a maiden World Cup appearance, with the nation two points adrift of the qualification places with four rounds remaining.

Canada are closing on qualification for a second World Cup after a 2-1 win over Mexico saw them take top spot in Confederation of North, Central American and Caribbean Association Football (CONCACAF) round three.

Canada top the standings on 16 points with the United States and Mexico following on 15 and 14 points respectively.

Panama follow the trio of 2026 FIFA World Cup host nations on 14 points, which places them in an inter-confederation playoff place.

Iran and South Korea look set to seal two berths from the Asian Football Confederation (AFC) process, with the nations heading Group A on 16 and 14 points in the third round of qualification.

The United Arab Emirates earned a controversial win over Lebanon to move into the playoff spot on six points, with their opponents dropping to fourth on five points.

Saudi Arabia lead Group B on 16 points with Japan occupying the final automatic place on 12 points.

Australia are currently in the playoff spot but lie one point behind Japan with four rounds of matches remaining.

The Confederation of African Football (CAF) process has seen 10 teams book places in the third round after completing a group stage, with five home-and-away playoffs now set to be drawn.

South Africa have made a "formal complaint" over the refereeing in their final group match, which saw Ghana clinch a 1-0 victory after a controversial penalty.

The result saw Ghana top the standings on goals scored, having finished level with South Africa on points.

The Oceania Football Confederation qualifiers are due to be staged in March after a series of COVID-19-related delays, where New Zealand will be favourites to advance to an inter-continental qualifier for next year’s tournament.