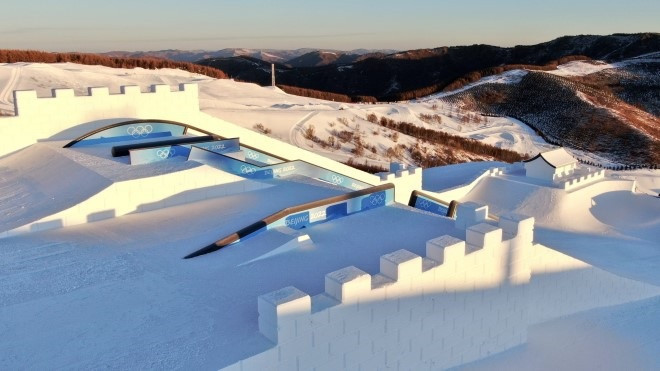 A replica of the Great Wall of China features in the course for the slopestyle competitions at the Winter Olympic Games here.

The International Ski Federation (FIS) has described the layout as "nothing short of incredible", claiming it is the "most technically-advanced, thoughtfully designed and awe-inspiring slopestyle course ever constructed".

German company Schneestern GmbH & Co, which built the much-lauded Pyeonchang 2018 slopestyle venue, has created the course for Beijing 2022 located at the Genting Snow Park in Zhangjiakou.

Alongside the standard sequence of three jib sections and three jumps, the course features a model of the Great Wall of China.

The FIS said the replica serves a purpose as it works to shield competitors from the prevailing west winds in the course’s upper parts.

Sections one and two of the jib segment boast five main sliding features apiece with the third comprising of a "rail-jump-butter box combo" to allow competitors to showcase their creativity, according to the FIS.

The course also includes the "wing" or "skew" jump that featured for the first time at Pyeonchang 2018 before slopestyle athletes will fly over two further jumps, described as a "beast" and "a huge, old-fashioned straight kicker".

"The main goal was a creative course that's connected to Chinese culture," said Dirk Scheumann, head designer for Schneestern and project manager for the Beijing 2022 course.

"The main challenge we faced was to protect riders from the strong west winds. ‘Where would you like to be in windy conditions?’

"I asked myself. Behind the wall, right?

"That's how Great Wall design came to be a part of the course. Also, the rail features are installed in steps, that go lower and lower towards the right side. We believe this will serve its function and that riders will be able to perform at their best.

"Once the wind issue was solved we put all effort to designing features that allowed for creative lines on the rails, take-offs, and landings, and I hope to see all the lines we imagined - and more - utilised by the riders at Beijing 2022."

Janis Jansons, head shaper of the Beijing 2022 course, claimed the venue and snow conditions will be of the "highest quality".

"After three weeks in the construction phase we’re now seeing the end result of the work, and it’s stunning," said Jansons.

"We can’t wait for athletes to arrive from around the world and begin riding the course, and we are excited about the upcoming moments that will take place here."

Snowboarders are set to tackle the course from from February 5 to 7 before the freestyle skiers are due to compete from February 13 to 15.