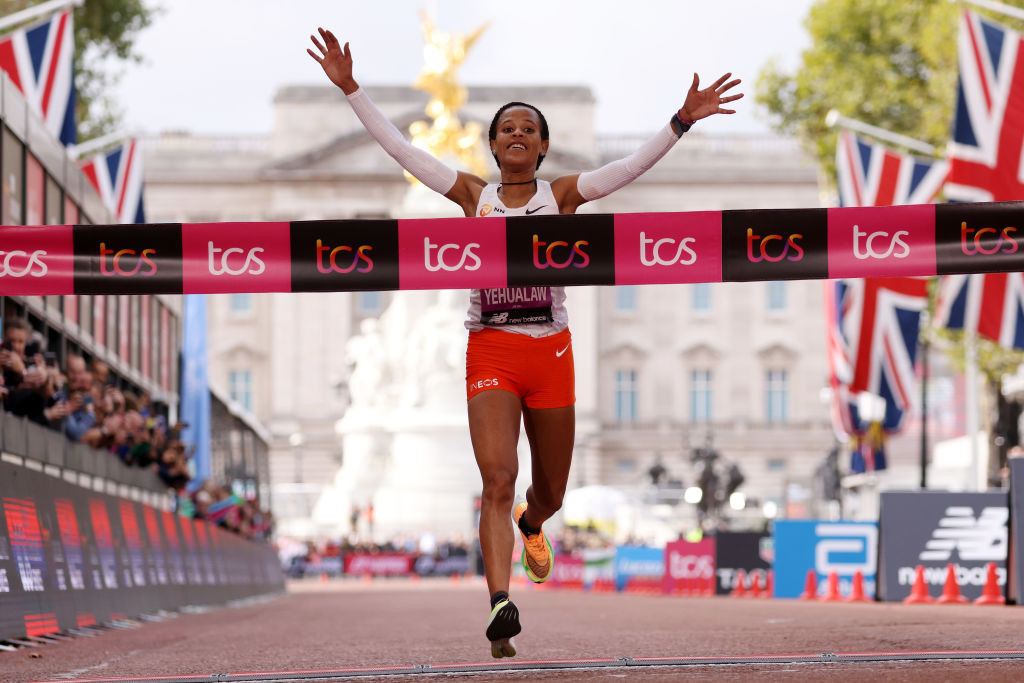 Ethiopia's 23-year-old Yalemzerf Yehualaw became the youngest-ever winner of the women's race at the London Marathon - despite falling with 10 kilometres to go - with Kenya's Amos Kipruto also earning victory with a late surge on his race debut in an open men's contest.

Much was expected of Yehualaw after a year in which she has set a 10km world record and recorded the fastest women's marathon debut in clocking 2 hours 17min 23sec, putting her sixth on the all-time list, to win in Hamburg.

Yehualaw delivered in style after breaking away from Kenya's defending champion Joyciline Jepkosgei - whose 10km world record she bettered in February - inside the final 5km to win in 2:17:26.

"I am so happy to win here in London," Yehualaw said.

"I have worked very hard to prepare for this race and to take the victory is amazing."

The pace has slowed slightly but we have a real race on here. ?
#LondonMarathon #WeRunTogether pic.twitter.com/rBqCLXnklw

Kipruto, the Doha 2019 World Athletics Championships bronze medallist, was one of relatively few elite Kenyan men left in today’s race but he flew the flag with pride as he broke clear from a leading pack of five runners with 2km remaining and powered to the finish line in 2:04:39.

Ethiopia’s Leul Gebresilase was a distant second in 2:05:12, closely followed by Belgium’s Olympic and world bronze medallist Bashir Abdi in 2:05:19.

Kipruto had indicated his potential earlier this year in finishing second behind his illustrious compatriot Eliud Kipchoge at the Tokyo Marathon in a personal best of 2:03:13.

Defending champion Sisay Lemma finished seventh, two places behind his 40-year-old Ethiopian compatriot Kenenisa Bekele, the multiple world and Olympic track champion who stands second on the all-time list after his victory in Berlin three years ago in 2:01:41.

For both Kipruto and Yehualaw, the victory represents a first World Marathon Majors title.