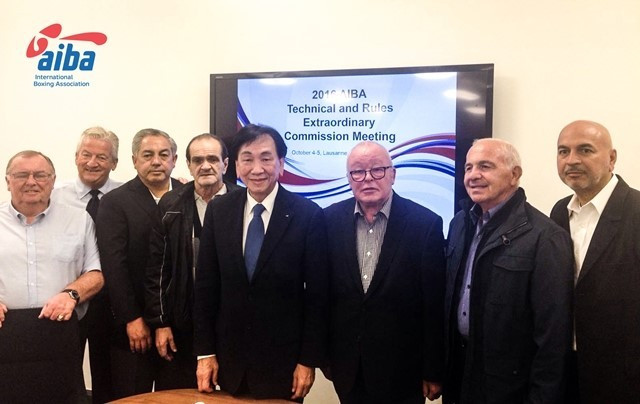 The International Boxing Association (AIBA) has sidelined all 36 referees and judges used at the Rio 2016 Olympic Games until an investigation has been concluded.

The boxing tournament at the Games was embroiled in controversy which saw AIBA remove an unspecified number of boxing judges from officiating at Rio 2016 after the huge criticism of decisions made there.

Eyebrows were raised when Russia's Evgeny Tishchenko took gold in the men’s heavyweight final after he was declared the winner in his clash with Kazakhstan's Vassily Levit on August 15, despite appearing to be on the back foot throughout.

Bantamweight world champion Michael Conlan of Ireland was involved in one of the most controversial contests of the Games, having appeared to have dominated a quarter-final against Vladimir Nikitin.

Conlan then went on an expletive-laden rant in a post-fight interview with RTE, where he claimed AIBA were "cheats" and that amateur boxing "stinks from the core to the very top".

The Irishman vowed never to fight again for AIBA, whose President C K Wu then revealed that Conlan faced disciplinary action after he put his middle finger up at the judges following his loss.

Nikitin was scheduled to take on eventual silver medallist Shakur Stevenson of the United States in the last four but pulled out "due to injuries sustained in his opening two wins", ensuring he left Rio 2016 with a bronze medal.

"While the majority of the boxing competition in Rio 2016 was received very positively thanks to the high level of boxing, the seamless integration of recent reforms such as headguard removal and the inclusion of non-AIBA pro boxers, a small number of decisions under debate indicated that further reforms in the AIBA R&J (Referees and Judges) procedures were necessary," AIBA said in a statement.

"Initial decisions were made on-site during Rio 2016 to ensure the smooth running of the rest of the competition.

"The results of a specific R&J investigation, currently underway, will allow AIBA to fully assess what action needs to be taken.

"In the meantime, it has been decided that all 36 R&Js that were used at the Olympic Games will not officiate at any AIBA event until the investigation reaches its conclusion, along with further immediate measures adopted by the commissions."

AIBA sent home an unspecified number of boxing judges from Rio following questionable decisions made in the Brazilian city.

It also "reassigned" executive director Karim Bouzidi to another role within the organisation following the controversy.

Last month, insidethegames revealed Bouzidi is set to leave AIBA and has been replaced by Frenchman William Louis-Marie.

AIBA made the decision to sideline the officials after its R&J and Technical and Rules Commissions had convened in Lausanne to discuss reforms and a "road map" for the next Olympic cycle leading to the Tokyo 2020 Games.

"Boxing was in the spotlight for positive reasons, but occasionally also for the wrong ones," said Wu.

"As an organisation, we have pulled together and I am extremely happy with the work that has been done this week by highly experienced members of our commissions, whose expertise and council will allow AIBA and its community to develop further throughout this next Olympic cycle."

AIBA says it believes that the current 10-point scoring system is the best scoring method, despite admitting "its subjective criteria sometimes causes misunderstandings and public debates".

As things currently stand, five officials judge each bout, however, a computer randomly selects three whose scores are counted.

For future events, a recommendation has been made to open up of all five of the judges' scorecards to determine the winner of a bout.

The current R&J certification system was also discussed as part of the three-day meeting in the Olympic Capital, with proposals put forward to optimise and grow the R&J community over the next four years in accordance with the values and ethics set out by AIBA commission members.

The current five-star R&J programme is set to be disbanded and it is hoped there will be greater empowerment and efficiency brought to the role of R&J evaluators during competitions.

It was also recommended that the draw of the R&J’s for each bout will now be automated via AIBA’s supplier Swiss Timing, and no longer conducted by a three-person Draw Commission to instil greater transparency.

"As a governing body, AIBA will always seek to evolve the sport but will continue to refute unsubstantiated claims that have tarnished the reputation of our sport," the statement added.

"The experience and knowledge required to officiate a boxing match takes years to accumulate, and moving forward it is essential that the reputation of the R&J’s is restored.

"The judging system can never become a scapegoat for boxers and coaches who perform disappointingly in the ring and display inappropriate behaviour or comments to media.

"This will be even more closely monitored in the future and firm disciplinary action will be taken when necessary."