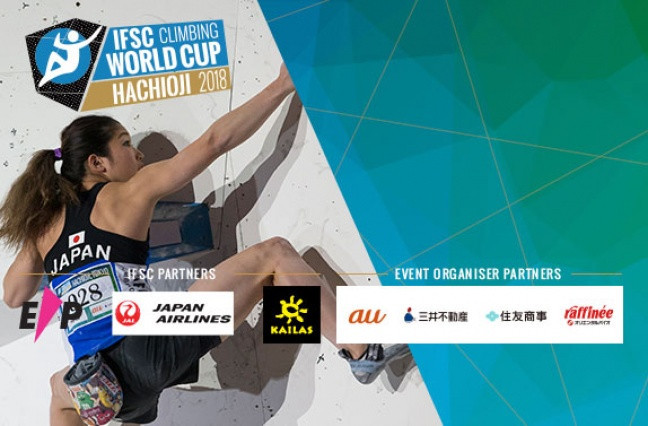 The 2018 International Federation of Sport Climbing (IFSC) Bouldering World Cup season is set to continue tomorrow with the start of the fifth event in Hachioji in Japan.

Japan has topped the IFSC World Cup team bouldering rankings every year since 2014, and they are on track to repeat the feat in 2018.

Altogether, 38 athletes from the country are registered to compete in front of their home crowd at the Ésforta Arena Hachiōji.

Akiyo Noguchi and Miho Nonaka are the only athletes this season to stand on the podium at every bouldering event.

They have won three of four competitions so far, and Noguchi swept both stages of the China Tour, held in Chongqing and Tai'an, earlier this month.

Another victory from either star on Sunday (June 3) will secure a spot on the bouldering season podium.

Among the men, Kokoro Fujii and Tomoa Narasaki both stood atop a podium this year and rank among the top five bouldering athletes, alongside Rei Sugimoto.

Also on the start list is combined youth world champion Meichi Narasaki, Yoshiyuki Ogata and Keita Watabe, all of whom won medals in Hachioji in 2017.

Team Japan will be strongly represented in #IFSCwc Hachioji this weekend! Noguchi Akiyo and Keita Watabe will compete along with thirty of their compatriots.
Find all the competitors here: https://t.co/nrKHgHSFJt pic.twitter.com/RtatOe3NUR

The two-day event in Hachioji will be followed by the penultimate stage of the 2018 bouldering season in Vail, which has been welcoming the discipline's most elite athletes to Colorado for more than a decade, on June 8 and 9.

If Slovenia’s Jernej Kruder excels in Hachioji, he will have the chance to clinch a place on the bouldering season podium the following week.

His team-mates Gregor Vezonik, who twice joined him in the medal places this year, and Katja Kadic, who competed in finals in Vail in 2017, are also on the start lists for Hachioji and Vail.

Japan and China each have two Buenos Aires 2018 Youth Olympic Games qualified athletes on the start list for Hachioji.

Asian youth bouldering champions Keita Dohi and Mao Nakamura, both from Japan, will compete in Hachioji and Vail.

Nakamura, meanwhile, returns after twice making the penultimate round.

Asian youth combined champion Yufei Pan of China will compete in both events as well.