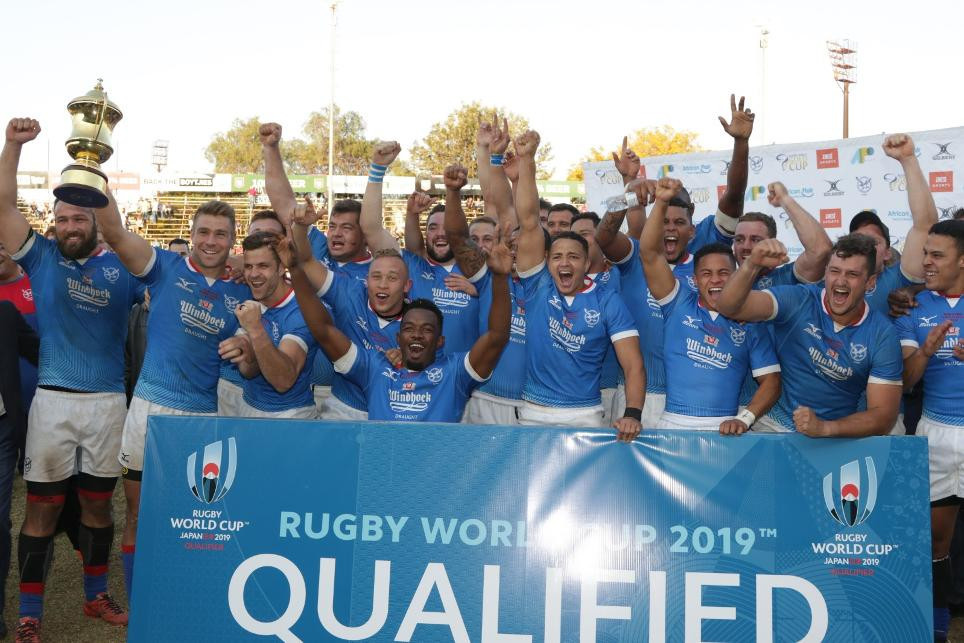 Namibia booked their place at the Japan 2019 Rugby World Cup by beating Kenya to win the Rugby Africa Gold Cup.

Both teams headed into the final match of the Rugby Africa tournament with 100 per cent records in the final stage of the qualifying event.

Namibia were hoping to use home advantage to strong effect at the Hage Geingob Rugby Stadium, but they trailed early on when William Ambaka scored a try to give Kenya the lead.

Chrysander Botha eased Namibian nerves with a try in response.

Then Louis van der Westhuizen and fly-half Cliven Loubser both went over the Kenyan line before half-time.

A brief Kenyan response came from Ambaka as his second try came them a foothold in the match before Mahepisa Tjeriko hit back on minute later to re-establish Namibia’s dominance.

Johan Tromp received a sin bin and Kenya were rewarded again for their efforts when Malcom Onsand and Mohammed Omollo added tries late on.

A comfortable Namibian victory had already been sealed, though, when Botha went over for the second time in the match, with his side triumphing 53-28.

The result saw Namibia top the six team standings, ensuring them of a place at the Rugby World Cup for the sixth successive tournament.

"They were impressive throughout the competition and are deserved champions.

"We look forward to welcoming the Namibia team and their fans to Japan for what promises to be a very special and ground-breaking Rugby World Cup - the first in Asia."

Namibia are scheduled to face world champions New Zealand, South Africa, Italy and the repechage winner in Pool B at the World Cup.

Kenya’s second place finish in the group means they will compete in a round robin repechage as they look to earn a place in the World Cup.

They are set to face the challenge of Canada, Hong Kong and Germany in Marseille during November to decide the final place.

Zimbabwe ended their participation at the Rugby Africa Gold Cup on a high as they secured a 38-18 win over Uganda.

Uganda finished third in the standings, despite the loss, with Zimbabwe ending in fifth place.

Tunisia beat Morocco 36-13 to finish in fourth place, leaving their rivals bottom of the standings.