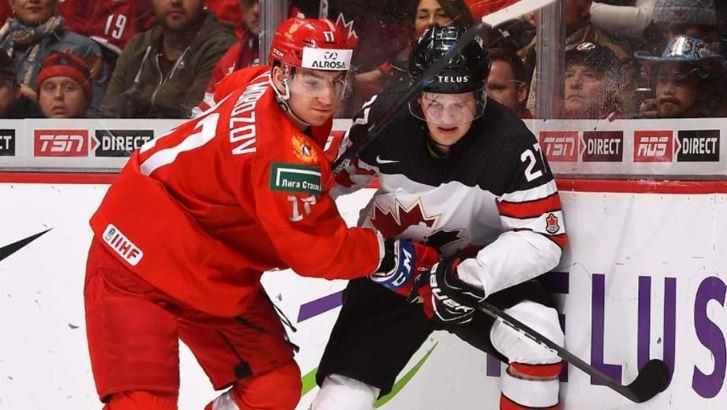 Russia beat Canada in a tight match at the International Ice Hockey Federation World Junior Championships today to advance in the quarter-finals as Group A winners.

The hosts and defending champions would undoubtably have been looking to finish top themselves, but a fantastic goal from Pavel Shen at the Rogers Arena in Vancouver helped Russia win 2-1.

It means Russia are now due to play Slovakia at the same arena in the last eight, who finished their group campaign yesterday with an 11-2 thrashing of Kazakhstan.

"When the whole arena is against you, booing you, we hear it all, so it brings the team together," he said.

"That's why we play our best here."

HIGHLIGHTS: @Shen_Pavel scored the winning goal with nine minutes left to lead Russia to a 2-1 victory over Canada and first place in Group A. #WorldJuniors @russiahockey @russiahockey_en @hc_wjc

"It was a very tough game, especially mentally because you have to make decisions faster," Denisenko added.

"We were prepared for them.

"They are a fast and physical team, but our goalie played well and gave us confidence."

The loss for Canada means they will now have to play Finland, who also lost today, to the United States in Group B.

The US won that comfortably at the Save On Foods Memorial Centre in Victoria 4-1.

The result means they will now face the Czech Republic in the next round, who thrashed Denmark 4-0 in Group A.

"I think we match up well with them," said the US’ leading scorer Ryan Poehling, describing the Czechs.

"We’ve got a lot of deep lines and they’re kind of front-heavy.

"So for us to just tighten up against those top guys and play four lines, it’s going to help us a lot."

HIGHLIGHTS: Sweden's @Trekronorse continue their winning streak and beats Kazakhstan 4-1 to top Group B of the #WorldJuniors.

Poehling got one of the goals for the US today, while Tyler Madden got a pair and Jason Robertson scored the other.

Sweden, meanwhile, finished 2018 top of Group B, thanks to a 4-1 win over Kazakhstan, which means they are now scheduled to face Switzerland.

The Swedes gained their win even with five skaters out due to illness.

"It affected us today, because we had a really short bench," coach Tomas Monten said.

Their goals came from Rasmus Sandin who scored twice, plus Emil Bemstrom and Nils Lundkvist who grabbed one each.

Tomorrow is a rest day, meaning the quarter-finals are set to start on Wednesday (January 2).