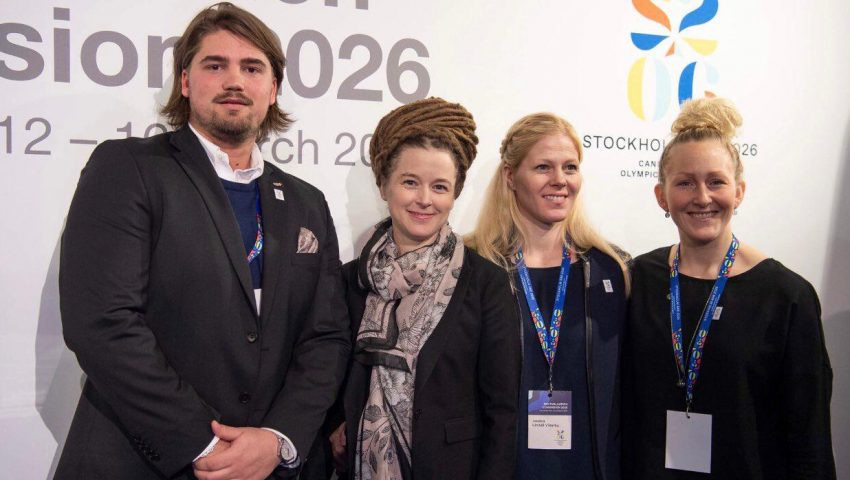 Sweden's Government have pledged backing to the bid from Stockholm and Åre 2026’s for the Winter 2026 Olympic and Paralympic Games, with Minister of Sport and Culture Amanda Lind claiming they were “united behind the decision”.

Stockholm Åre 2026's bid for the Winter Olympic and Paralympic Games has been in doubt, due to a lack of firm assurances the Government would provide guarantees on issues such as security and entry visas into the country which are required by the International Olympic Committee.

Ahead of the deadline for Stockholm Åre 2026 and their Italian challengers Milan Cortina 2026 to lodge their Candidature files with the IOC in Lausanne on Friday (April 12), the Swedish Government have now provided crucial support.

“It would be great for Sweden if it was an Olympic Games,” Lind said.

“There would be a lot of moving pleasure.

“For the entire sports movement, it would be a huge boost.

"As a Sports Minister I am glad that we have been able to give this message.

“The Government was united behind the decision.

“If we get an Olympic Games then it would be very strengthening, but also very positive in the way SOK and the Swedish Paralympic Committee planned the Olympics, to be able to show that one can do it without expensive new buildings in as far as possible sustainable and climate-smart way.

“It would be a way for Sweden to show how sports events can take place in the future.”

Stockholm Åre 2026 bid leaders had been trying to convince politicians that under Agenda 2020, the reform package launched by the IOC in December 2014, they can organise an Olympic Games putting the emphasis on sustainability and efficiency.

Stefan Löfven was able to form a Government in January, with the administration a coalition of Social Democrats and the Green Party, who Lind represents.

Political opinion had been seen as being split at both national and city level about whether there should be backing for Stockholm Åre 2026.

"This message was a very important milestone in the work that has been going on for a long time and which has involved many people for many years," Brisius said.

“The Government's support is central to both the actual support in the form of the security work, but also because this is something that will gather the whole of Sweden and it is the government's master branch.

“We have had continuous positive contact for two years with many people in politics, in the parliament in the government and representatives from there.

“It has been a work that has been of an informative nature in which we informed and provided new information.

“Because there is so much that has changed about how to arrange an Olympics and how to apply for it.

“Then we have let each one of them take a stand and create their own opinion of what they think.

“We have not tried to push this in any way but we have informed.

“We have many wise and smart people among our politicians who have realised the value of this and realized that this new fit for Sweden and that we can make a change.

“A change not only for Sweden, but also for the Olympic movement forward.”

Swedish Olympic Committee President Mats Årjes added “Now, there is full focus on the positive teamwork on the vote on June 24."

“We have a worthy and experienced opponent.

“But with the Swedish Government as a whole, we are stronger than ever before.”

This included guarantees of the security budget, which was estimated at €415 million (£355 million/$465 million).

The Government support for both bids with serve a major boost for the IOC.

The IOC had been hit by withdrawals of bids from Calgary in Canada and Sion in Switzerland, following referendums.

Innsbruck also withdrew following a referendum defeat, while a second Austrian effort in Graz was ended when it was announced a petition to hold a local poll had been given approval.

It found even more people in Milan support it – 87 per cent.

The figures are significantly higher than a similar poll conducted in Stockholm, where the Swedish capital is bidding along with Åre.

There it found 55 per cent of those polled in Sweden supported their bid.

Following the conclusion of IOC Evaluation Commission visits to the two candidates in recent weeks, their report will be published on May 24.

The publication will come one month before the final vote at the IOC Session in Lausanne on June 24.