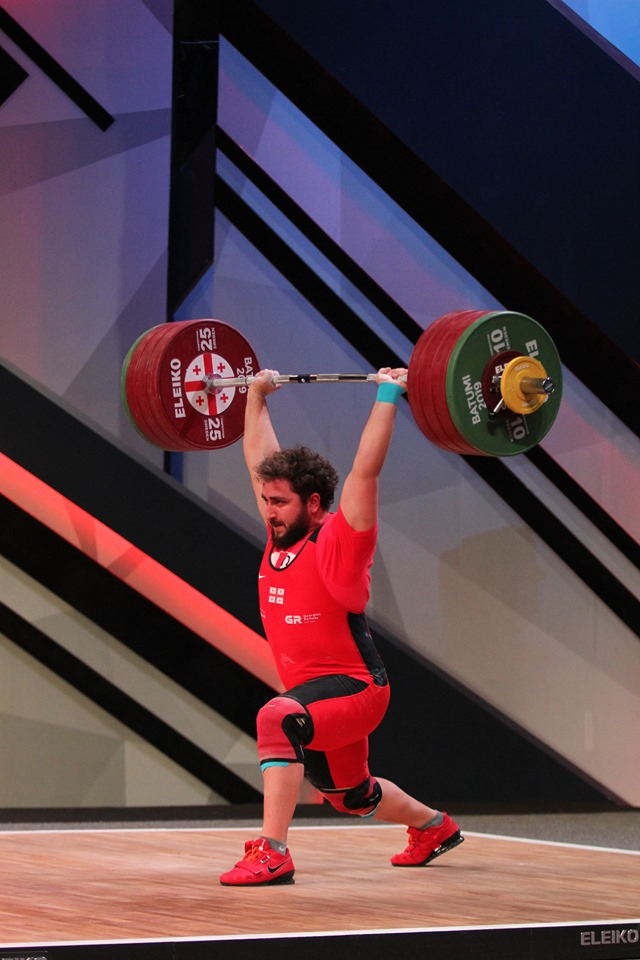 Georgia had its first champion of the week when Irakli Chkheidze overcame his recent struggles in the clean and jerk to win the men’s 102kg at the International Weightlifting Federation (IWF) Junior World Championships in Suva, Fiji.

After eight men’s events, there have been eight nations on top of the podium.

It became a head-to-head between Chkheidze, the 2018 world and European junior champion at 105kg, and Andrei Arlionak of Belarus after the six other competitors collectively failed with 12 of their 18 lifts in the clean and jerk.

Amir Azizi, of Iran, missed two of them and finished 10kg behind Arlionak in third place.

Arlionak stood out from the rest by making six from six to finish on 370kg.

The event is being shown this week, 1-8 June.

Since dropping to the new 102kg class, Chkheidze had made only two good clean and jerks from six attempts in the senior IWF World Championships and European Championships, finishing out of the medals.

Chkheidze’s winning total of 371kg continued his trend of going slowly down from a peak of 386kg, a career-best at the heavier 105kg class, when he won the 2018 European junior title – but he is still very well placed in qualifying for Tokyo 2020.

In the women’s 81kg, Karina Kuzganbayeva of Kazakhstan had a sweep of the medals to finish on 224kg, ahead of the Korean Jang Hyeon-ju by 3kg.

The bronze went to Ekaterina Vizgina of Russia (206), one place ahead of team mate Tatiana Fedichkina, who had been third in the snatch.

Kuzganbayeva was Asian youth champion two years ago but had not competed since and, like the two Russians, does not feature in the Tokyo 2020 rankings.