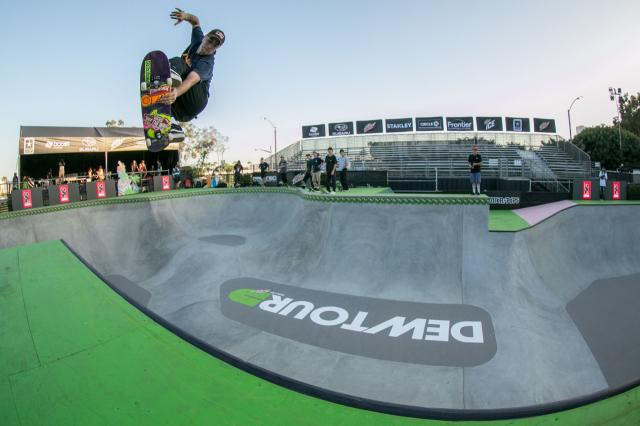 Long Beach in California is this week welcoming more than 300 of the world’s best male and female skateboarders who will compete in the park and street events for a chance to win the Dew Tour title, while earning valuable points towards their country’s Olympic team for Tokyo 2020.

The Olympic qualification system is based on world rankings maintained by World Skate.

Skaters earn points by competing in World Skate-sanctioned events during the qualifying period, which started on January 1 of this year and will end on May 31, 2020.

Dew Tour, part of the World Skate-sanctioned Five-Star Street and Park skateboarding, will serve as the last global qualifying event in the United States next year.

This year’s Dew Tour will host open qualifiers as well as quarter-final, semi-final and final rounds of competition, offering fans the chance to see skaters from across the globe at Long Beach Convention Center.

Competition is due to start tomorrow and conclude on Sunday (June 16).

The park competition course comprises of a concrete "pool" with a combination of ramps and course bends.

For the street competition, a street-like course has been designed featuring stairs, curbs, slopes and rails.

Dew Tour is free and open to the public.

The event also includes the Dew Tour Experience, an interactive sponsor village, and Dew Tour on the Green, a festival of outdoor music, food and drink vendors and lifestyle activities, including a public skatepark and a learn-to-skate area.

Various events incorporating the Long Beach community will be featured throughout the four days through non-profit partners.

Dew Tour Long Beach will be live-streamed in its entirety on Worldskate.tv and DewTour.com, equating to 31 hours of coverage.

Last month, World Skateboarding Federation President Tim McFerran warned the sport's Olympic debut at Tokyo 2020 could be "embarrassing" after it was axed from the Lima 2019 Pan American Games amid a dispute regarding qualification.

McFerran claimed similar issues would continue to plague the build-up to next year's Olympic Games as he stepped up his criticism of World Skate, installed as the governing body for the sport at Tokyo 2020, and its President Sabatino Aracu.

Skateboarding was removed from the programme for the Pan American Games in the Peruvian capital by Panam Sports, which claimed World Skate and Street League Skateboarding (SLS) had shown a "lack of respect" towards the multi-sport event.

Panam Sports said the two bodies had not fulfilled their requirements on the qualification system for Lima 2019 and its status as an Olympic qualifier.

The continental organisation also criticised a decision to schedule an SLS World Tour in Los Angeles, one of the competitions which offers ranking points for skateboarders hoping to compete at Tokyo 2020, at the same time as the Lima 2019 event.

McFerran claimed World Skate and the SLS had "continued to disrespect skateboarding with the mishandling of the great opportunity" to be part of the Pan American Games.