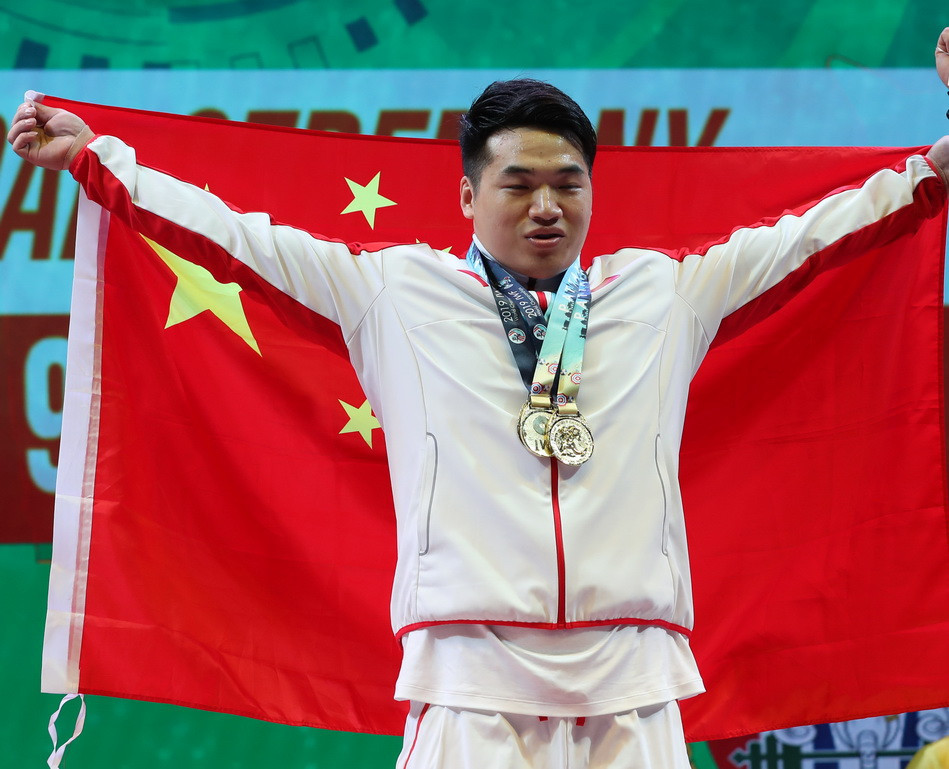 The 25-year-old finished second in the snatch with 180kg – after two failed attempts at 175kg – before winning the clean and jerk with his final attempt at 230kg to register a total of 410kg.

His clean and jerk mark was 1kg shy of his world record, set in July during weightlifting's test event for the Tokyo 2020 Olympic Games.

Tian, the 2018 world silver medallist behind Iran's Sohrab Moradi who could not compete this year due to injury, was pushed all the way by Fares Ibrahim Elbakh.

But the Qatari ultimately had to settle for silver medals in both the clean and jerk and total with 224kg and 402kg, respectively.

Had he managed his final attempt at 230kg, Tian would have needed at least 231kg – equalling his world record – to claim the clean and jerk gold medal.

The overall bronze medallist with 394kg was Georgia's Anton Pliesnoi, who posted six good lifts out of six in winning the snatch with 181kg and coming fourth in the clean and jerk with 213kg.

The 2019 European bronze medallist represented Ukraine up until last year.

Pan American champion Jhonatan Rivas Mosquera of Colombia was the snatch bronze medallist with 179kg, while Iran's Seyedayoob Mousavijarahi rounded off the podium in the clean and jerk with 214kg.

Iran's Kianoush Rostami, who beat Tian to the men's 85kg gold medal at the Rio 2016 Olympics, bombed out of the snatch after three failed attempts at 180kg, then declined his three clean and jerk lifts.

After his third no lift, Rostami shouted in Arabic and pointed his finger at the members of jury.

It came after there appeared to be confusion before the Iranian took to the platform for his opening attempt, with another athlete called when he seemed ready to go.

He produced a lift of 161kg in the C session to better the 160kg he registered at the Junior World Championships in Fiji's capital Suva in June.

In the women's 76kg event, North Korea's Rim Jong Sim eased to overall victory, but missed out on the total world record and the clean and jerk crown, to China's Zhang Wangli, after failing with her last attempt at 155kg.

The two-time Olympic champion, who was the silver medallist at the 2018 IWF World Championships in Turkmenistan's capital Ashgabat, secured top honours in the snatch with her first attempt at 120kg, and then went on to break her own world record of 123kg by managing 124kg with her second attempt.

She then tried to break her world record for a second time, but fell short at 126kg.

In the clean and jerk, Rim finished second with 152kg for a total of 276kg, 2kg shy of her world record.

Zhang, last year's world champion in the women's 71kg category, came second in the total with 271kg, having ranked second in the snatch with 118kg and first in the clean and jerk on 153kg.

Completing the top three, just as she did at Ashgabat 2018, was Ecuador's Neisi Patricia Barrera Dajomes with 245kg.

She finished third in the snatch with 110kg and fourth in the clean and jerk with 135kg.

She ended on the same total as Barrera Dajomes, but had to settle for fourth place after the Ecuadorian posted 245kg first.

Action continues tomorrow, with medals in the men's 102kg and women's 81kg events.