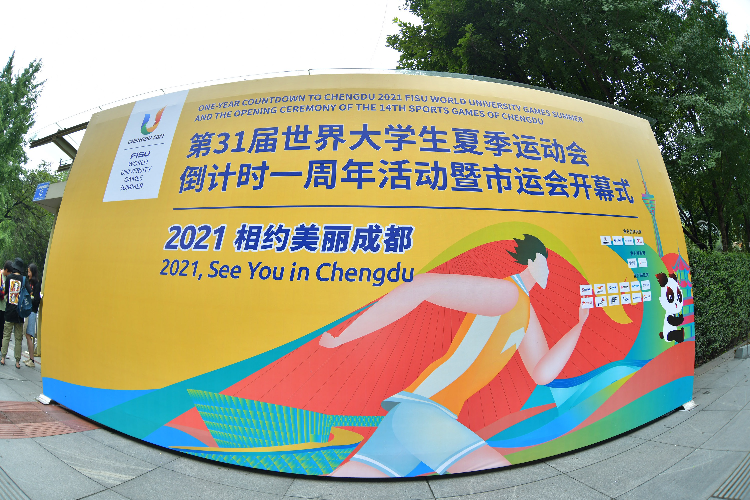 Chengdu 2021 has hosted a celebration event to mark the one-year to go countdown to the Summer World University Games.

Organisers had initially planned to host the ceremony in the main stadium for next year’s Games, but poor weather conditions saw the event moved inside at the Chengdu Broadcasting and Television Station.

The one-hour show began with a visual depiction of a sunbird, a symbol of ancient Sichuan culture, being displayed on the main stadium at the Dong'an Lake Sports Park.

Representatives from Chengdu 2021, the International University Sports Federation (FISU) and International Olympic Committee vice-president Yu Zaiqing were among the attendees.

FISU President Oleg Matytsin appeared via video link, where he praised the efforts of Chengdu 2021 in preparing for the Games amid the coronavirus pandemic and called for a collective effort to help ensure the success of next year’s event.

"There is only one year to go until we celebrate the opening of the World University Games in Chengdu.

"When Chengdu kindly took on the responsibility of hosting the Games we all knew that our colleagues there were facing a great challenge.

"It would not be easy to prepare an event that would meet and even pass expectations in the time available.

"Of course, that challenge has become even bigger in recent months.

"Despite this progress is on track to make dreams come true for thousands of the best university athletes, right at the heart of Sichuan.

"For all this progress I would like to express my sincere gratitude once again on behalf of all of us at FISU.

"I would like to be very clear, the Organising Committee, the city of Chengdu, the Federation of University Sport China, FISU and all the athletes training in difficult conditions, we are not alone in working for the success of next year’s World University Games.

"This success depends on the collective effort of thousands, we all have a part to play, we all have work to do.

"Let us do so in the knowledge that delivering opportunities of university sport is even more important now than ever.

"The power of sports allows everyone to gather together in friendship and peace, so that people can better understand each other and be healthier.

"This is the power of the World University Games.

"I look forward to celebrating them with you one year from now in Chengdu."

On the one-year countdown ceremony of the Chengdu 2021 FISU World University Summer, the singing and dancing of several stars touched all the audience.@FISU #1yearcountdown #FISU #Chengdu2021 pic.twitter.com/Z6utYpmltV

The one-year to go ceremony featured the unveiling of a University Games AI satellite by organisers.

Chinese 100 metres star Su Bingtian was among the athletes to participate during the event.

Su signed a virtual invitation letter, which encourages nations to send their athletes to next year’s World University Games in the Chinese city.

Organisers also explained that artificial intelligence and virtual reality would form key parts of the Opening Ceremony of next year’s Games.

The countdown ceremony also saw performances from dancers and singers, while the official Games mascot was featured.

Construction of 13 new venues has been finished, while the renovation work on 36 existing venues is well underway.

The competition schedule has been finalised, while efforts for venue operation planning, sports equipment preparation, services for technical officials and doping control initiatives are advancing.

China is set to host the Summer University Games for the third time next year, 10 years on from the last time it held the event in Shenzhen.

It first held the competition in Beijing in 2001.

More than 10,000 athletes are expected to compete at Chengdu 2021 across 18 sport disciplines, including rowing, shooting and wushu.

The event has changed dates twice, with competition now scheduled for August 18 to 29 in 2021.