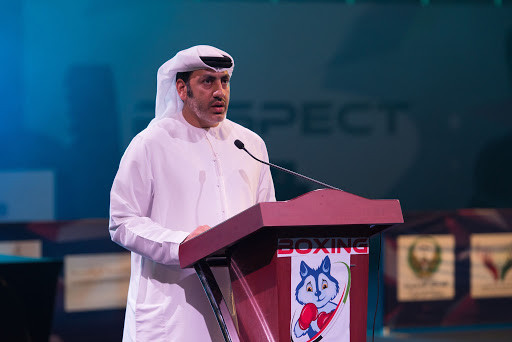 Al Otaiba is one of seven candidates seeking to be elected AIBA President during an online Congress on December 12 and 13.

The election is considered vital if AIBA is to regain its status as the Olympic governing body for the sport in time for Paris 2024.

The United Arab Emirates official has claimed he is well-positioned to help AIBA restore its recognition, saying that his two years as ABSC President has seen the organisation achieve major reforms of governance, referees, finance and anti-doping rules.

The areas were among the key concerns raised by the IOC which led to AIBA’s suspension.

AIBA's financial situation is another major concern, with the organisation thought to be around $20 million (£15 million/€16.9 million) in debt.

Al Otaiba revealed in his manifesto that he is targeting resolving the debt issues within one year.

Mikayilov has claimed he would remove debt within 100 days with the creation of a CHF25 million (£21 million/$27 million/€23 million) fund from unnamed sponsors and partners from Azerbaijan and other European countries.

Kremlev has claimed he could attract $50 million (£38 million/€42 million) in sponsorship money within "one or two years".

This would reportedly involve compliance with International Financial Reporting Standards and external audits.

Governance was cited as a key priority.

He has vowed to develop and modernise the constitution, enhance regulations and restructure the organisation.

Al Otabia has also targeted decentralisation of AIBA, transparency and greater sustainability, as well as ensuring the organisation operates in an "Independent Control environment" and has a functioning Executive Committee.

The AIBA vice-president has additionally pledged he would work to increase the number of competitions for women by 50 per cent as part of a focus on gender equality.

The focus would also see the allocation of "30 per cent of female officials during activities", as well as launching an education programme.

"It is unacceptable that AIBA does lack strategic planning, with principal issues being managed on personal preferences and whims without clear goals for the future," Al Otabia wrote in his manifesto launch.

"We have been suffering in the past from dramatic and rapid changes which led to decisions that have often weighed against the future of boxing and put us in this critical situation.

"We are tired to empty promises and catch slogans that can never take off the ground.

"We can hardly live in isolation of our environment, which necessitates us to deal with the multi-faceted and rapid changes of our age and keep pace with the developments taking place across all fronts around us.

"I believe in fostering engagement capabilities, building trust, and attracting real experts capable of giving independent, impartial and neutral opinions, regardless of their positions.

"It goes without saying that the main goal now is the restoration of recognition of the IOC to ensure our players will participate in the Olympic Games and realise their Olympic dream.

"However, we must also spare no effort to bring our beloved sport back on track towards its prestigious position, so that boxing becomes an inspiration for each and every one wishing to come aboard our noble sport."

Al Otaiba is part of a packed field of candidates.