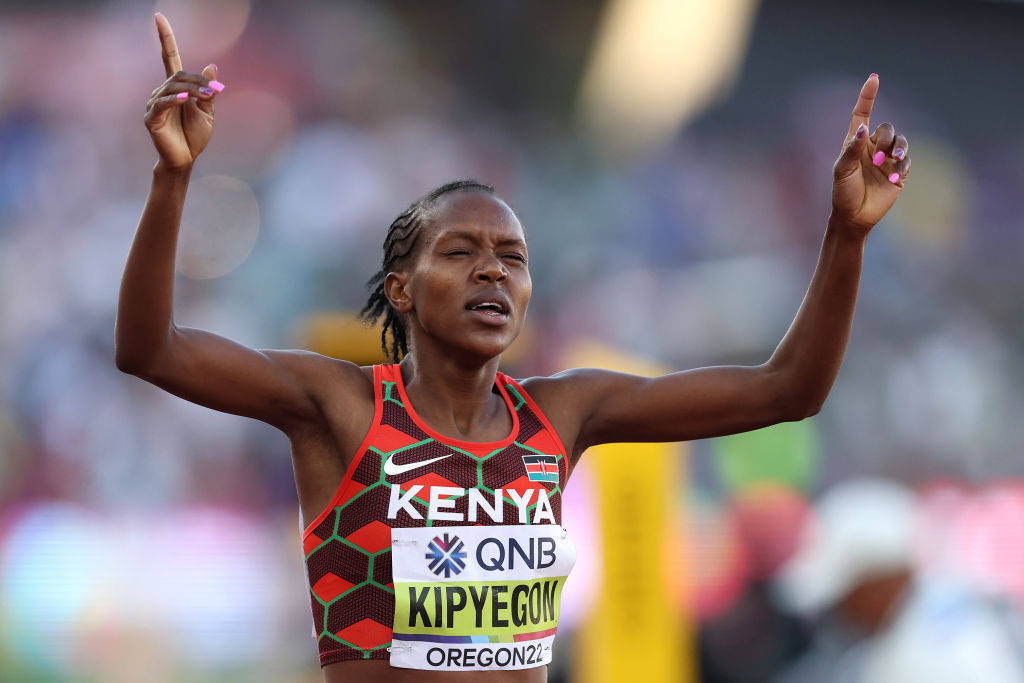 Kenya’s world and Olympic 1500 metres champion Faith Kipyegon will race at the Diamond League meeting in Monaco tomorrow with a world record in mind.

Kipyegon ran 3min 51.07sec in the principality last year, the fourth-fastest time in history and exactly one second off the mark Ethiopia's Genzebe Dibaba set on the same track in 2015.

Having achieved two 3:52 clockings already this year, the Kenyan - who retained her world title in Eugene last month - has good reason for confidence as she looks ahead to the Herculis EBS meeting in the Stade Louis II.

The field includes another five sub-four-minute runners including the Ethiopian pair of Hirut Meshesha and Axumawit Embaye.

Kipyegon is one of 12 world champions on the starting lists for Monaco.

Jamaica's Shelly-Ann Fraser-Pryce, who ran a season's best and 2022 world-leading mark of 10.66sec in Chorzow on Saturday and won in 10.67 at yesterday’s Gyulai Memorial meeting in Hungary, will race her third 100m in five days.

Her opposition will include compatriot Shericka Jackson, the world 200m champion who ran 20.02 to win in Hungary.

World 400m champion Michael Norman will take on fellow American and two-time world champion Noah Lyles in a men's 200m field which is also due to include their 18-year-old compatriot Erriyon Knighton, the world bronze medallist, whose 19.49 clocking earlier this year put him fifth on the all-time list.

Lyles ran 19.31 to win the world title in Eugene and it will be interesting to see whether he can reach similar territory again.

The men's 110m hurdles will bring together the double world champion Grant Holloway of the United States - beaten on a photo finish in Hungary by Jamaica's Rasheed Broadbell - Olympic champion Hansle Parchment, also of Jamaica, US champion Daniel Roberts and France's world under-20 record-holder Sasha Zhoya.

Other world champions on the track include the double Olympic 400m champion Shaunae Miller-Uibo of The Bahamas, who will race over one lap against Olympic 200m bronze medallist Gabby Thomas of the US and Sada Williams, who won the Commonwealth title for Barbados in Birmingham.

In the men's 3,000m, Kenya's world 5,000m silver medallist Jacob Krop appears favourite in a field which includes the man who has previously run for the Refugee Athlete Team and heads this year’s world rankings, Dominic Lokinyomo Lobalu of South Sudan, along with last year's Diamond League champion Berihu Aregawi of Ethiopia.

While Rojas will be confident about extending her winning run, the men’s high jump looks less easy to predict.

The line-up includes the top six from Oregon including the man who shared the Olympic title with Barshim, his friend and sometime training partner Gianmarco Tamberi of Italy, and fellow world medallists Woo Sang-hyeok of South Korea and Ukraine's Andriy Protsenko.

World under-20 champion Erwan Konate from France will also be involved having successfully defended his title in Cali last week.

Barber, who missed this meeting last year because of injury, won the Commonwealth Games title after recovering from COVID-19 and will face a re-match with her fellow medallists from Oregon, Kara Winger of the US and Japan's Haruka Kitaguchi, a last-round winner in Chorzow on Saturday.

Also in the field will be Barber’s compatriot Mackenzie Little, who threw a personal best of 64.27 metres for the Commonwealth Games silver medal.