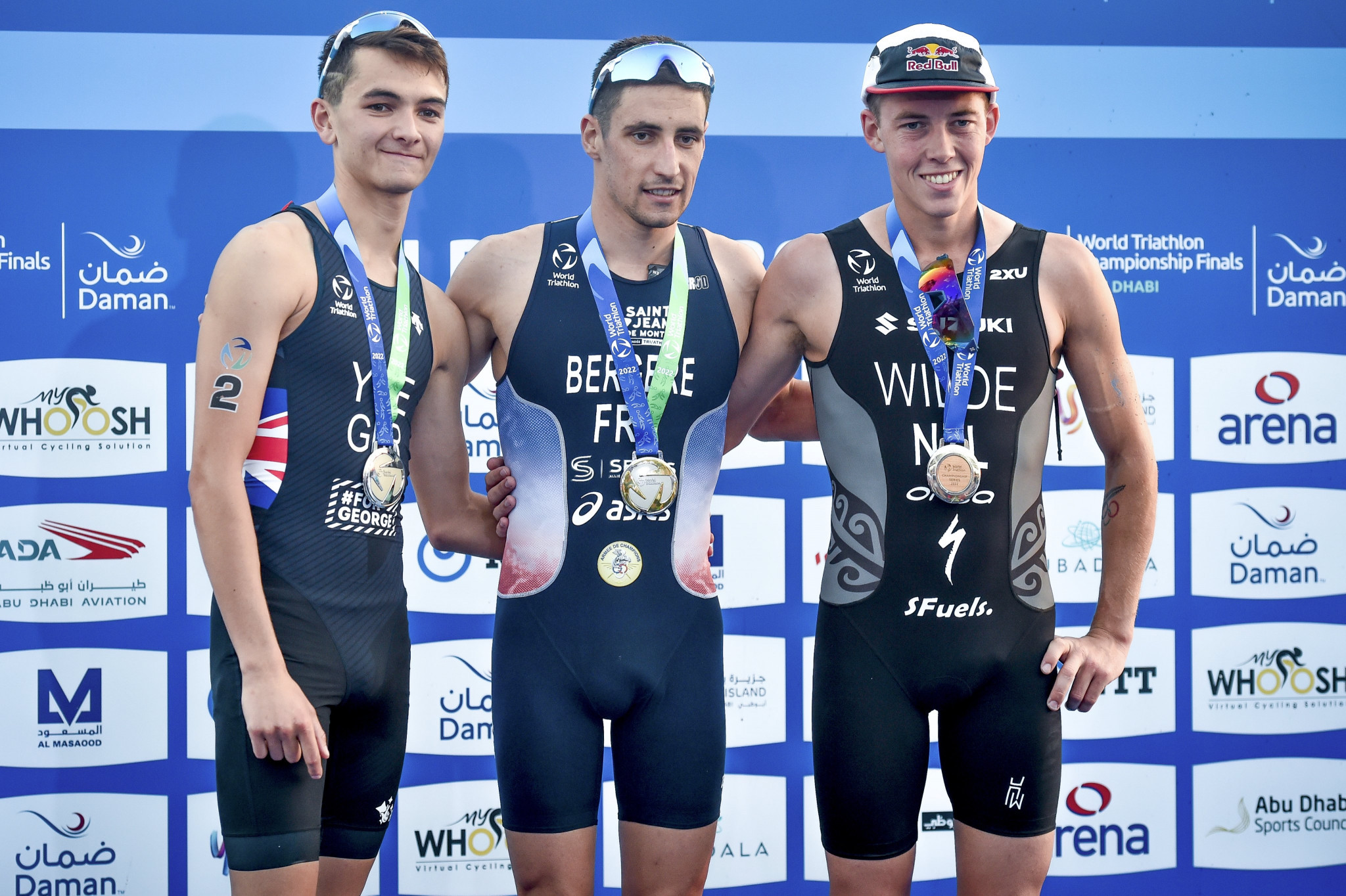 The Frenchman travelled to Abu Dhabi in third place in the rankings, but his best Series result this year had been second in Leeds, and he was widely considered an outsider to leader Wilde of New Zealand and Yee of Britain, the Olympic bronze and silver medallists respectively.

However, Bergere delivered what Yee conceded was "the perfect race" to claim the title by the barest of margins.

Yee and Wilde finished fourth and sixth respectively - had either ranked one place higher in the United Arab Emirates capital, they would have been crowned world champion.

Both Wilde and Yee had the title in their hands as the rankings stood within the last 400 metres, but instead they had to settle for overall bronze and silver respectively.

Bergere enjoyed a solid 1,500m swim and formed part of what quickly became a front nine during the 40km bike, which Wilde narrowly missed joining after the first transition.

Yee was 18sec slower than Wilde on the swim and 41sec adrift of early leader Márk Dévay, but an efficient transition and some strong work with reigning world and Olympic champion Kristian Blummenfelt of Norway enabled him to join the main chasing pack.

The leaders put significant distance between themselves and the big group behind them, for whom a crash on the fifth lap had them more then one minute off the pace.

However, a superb final lap clawed the deficit back to around 35 seconds, setting up a thrilling 10km run finale.

Bergere knew he had to win the race to stand a chance of taking the title, and set about putting distance between himself and the rest.

He ultimately came home in 1 hour 44min 25sec, giving him a nine-second victory over the United States' Morgan Pearson, who enjoyed a superb race on his first Championship Series appearance of the season after returning from injury.

Yee quickly began climbing the standings on the run, reaching sixth at 24 seconds adrift at the halfway stage, but Wilde was unable to make progress as quickly, languishing in ninth and 39 seconds off the pace after two laps.

Leo Bergere is the men’s 2022 World Triathlon Champion 🏆! The title changed hands four times in one of the most nail-biting season finales of all time at the #AbuDhabiFinals pic.twitter.com/sUHslnxWu5

Briton Yee became engaged in a battle for third with Jelle Geens, needing to overtake the Belgian to take the title.

He briefly managed to do that, but Geens prevailed by three seconds in a sprint finish with his time of 1:44:34.

Wilde meanwhile had propelled himself up to fifth going into the last lap and through the final split, a position which would have been enough to take the title regardless of where Bergere and Yee finished.

However, Australia's Matthew Hauser finished strongly to go past him and ultimately finished 22 seconds clear of Wilde, who placed sixth.

Bergere was ecstatic at his victory, and said his sole focus was on finishing as high as possible in the race.

"It’s insane, I don’t know what to say, I didn’t want to do the maths before the race I just wanted to race it all out and try for the breakaway," he said.

"We went for it as a team, and I can't believe today.

"I was really focused on what I was doing, I didn’t want to think about anything else.

"I was chasing this win for a long time and I knew I was capable, I just needed all the stars to align, and to do it here at the final in Abu Dhabi is incredible."

Earlier in the day, World Triathlon held its first ever Para triathlon mixed relay, an event which it hopes can feature at the Paralympics and officials believe proved a hit.

"I have been blown away watching the racing today, the spectators and athletes have loved it and it will be fantastic if we can get this event into the Paralympic Games," World Triathlon vice-president Debbie Alexander, who is also an International Paralympic Committee Governing Board member, said.

"We know the huge impact that the mixed relay had in the Olympics, and I am convinced that it will do the same for Para triathlon.

"We are making history today and I want to thank everyone involved for continuing to evolve and innovate our sport."

The race, requiring each athlete to complete a 150m swim, 4.5km bike and a run of between 1 and 1.2km, was won by Australia's second team consisting of Lauren Parker, Jeremy Peacock and Sam Harding.

Peacock raced two non-consecutive legs, with teams of three permitted where the full four athletes was not possible.

They crossed the finish line in 1:03:47, giving them a winning margin of more than two minutes.