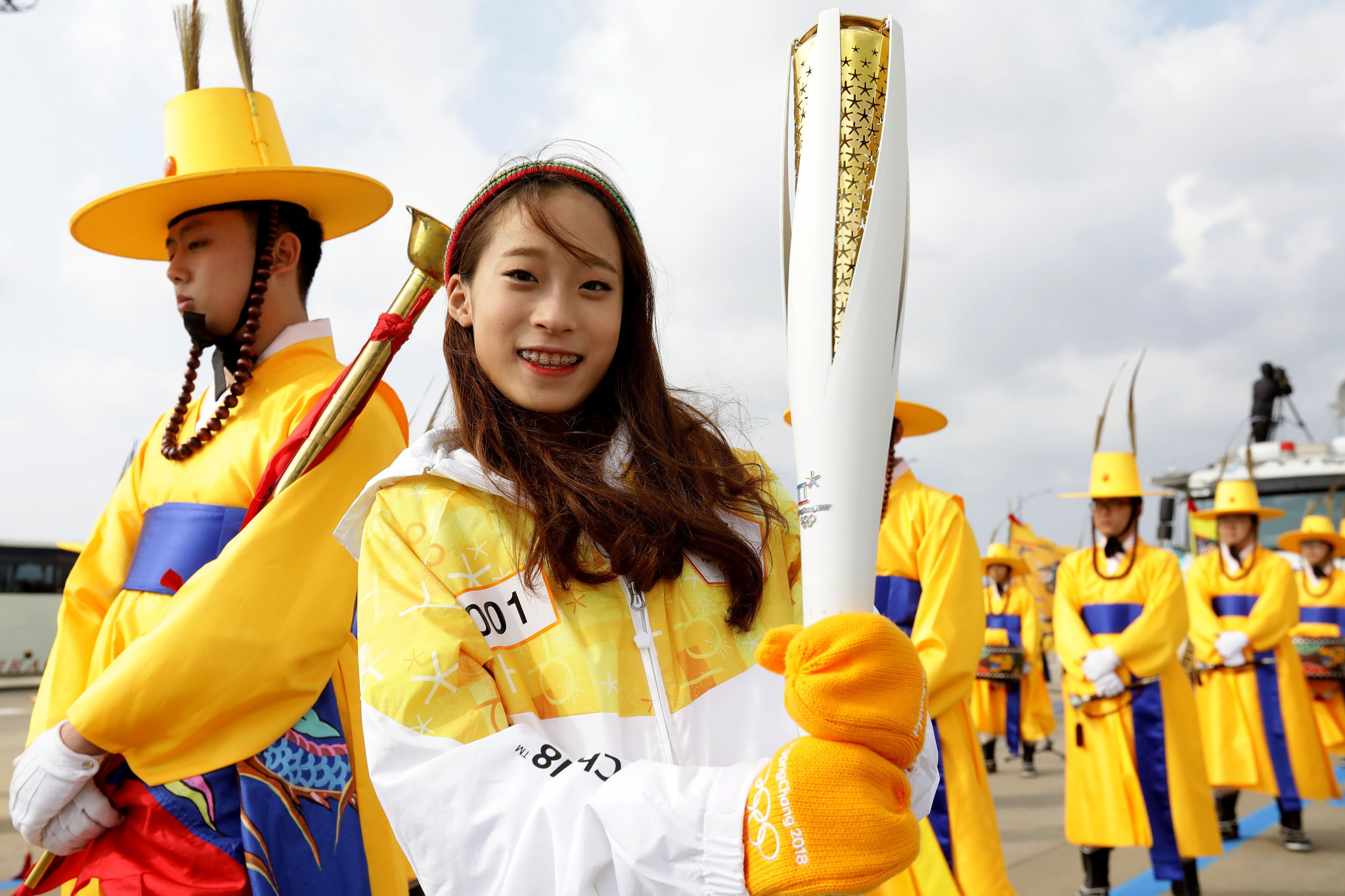 The sun shone as the Olympic flame for Pyeongchang 2018 arrived in the Land of the Morning Calm today.

It landed at Incheon, in the north-west of South Korea, on a specially-chartered Korean Air aircraft.

Emblazoned on its fuselage, set against a gold background, were the words "Let Everyone Shine", the philosophy of the entire Torch Relay.

Vancouver 2010 skating gold medallist Kim Yuna had accompanied the flame on its flight from Greece.

Kim carried it from the aircraft in a special safety lamp along with South Korea's Minister of Culture, Sports and Tourism Do Jong-hwan.

Then she lit the first cauldron with Prime Minister Lee Nak Yeong.

"Today is a very important and proud symbol of our work and passion in bringing one of the most exciting winter sporting events ever to our country."

The organisers followed the example of Seoul 1988 when the first Torchbearers had been children of school age.

She received the Torch from the Prime Minister before running the first 200 metres on Incheon Bridge.

You won her first national title at 11-years-of-age and hopes one day to follow in the footsteps of Kim.

"It is my dream to represent my country at an Olympic Winter Games and I am working hard to make that dream a reality very soon," she said.

"The Games will really inspire me and will be an experience I will never forget."

Television star and comedian Yoo Jae-suk then continued the Relay which will cover exactly 2,018 kilometres before it reaches Pyeongchang.

In the evening, 2,018 supporters of the flame linked hands at the Songdo Moonlight Festival Park to celebrate its arrival.

The linking of hands has a real resonance for South Koreans.

In 1988, the song Hand in Hand had been emblematic of Olympic harmony at the Games in Seoul.

R&B star Insooni sang Let Everyone Shine,  the song which will provide a soundtrack for the 2018 Relay.

Just as 30 years ago, musical and artistic performances will form an important backdrop to the Relay celebrations.

Taeyang, another honorary ambassador, has recorded a special song Louder to celebrate the Games.

It seems a long time since Park Ji-sung received the flame on a road in Ancient Olympia but it was in fact only a week ago.

The former Manchester United footballer was the first of two Koreans to carry the flame on Greek soil.

Now the focus shifts to their compatriots.

The chosen Torchbearers are called "Achievers and Dreamers".

With a landmark 100 days to go before the Games begin, the flame now heads to Jeju Island for day two of the Relay.

This was the place where the 1988 Seoul Torch Relay had first landed, amid rain clouds which cleared just as the flame arrived.

Organisers will be hoping the same good fortune attends the entire Relay.

Within the first week it will also travel on a steam train, a marine cable car in Yeosu and, on the fourth day in Daeju and Jejon, it will be carried by a robot.