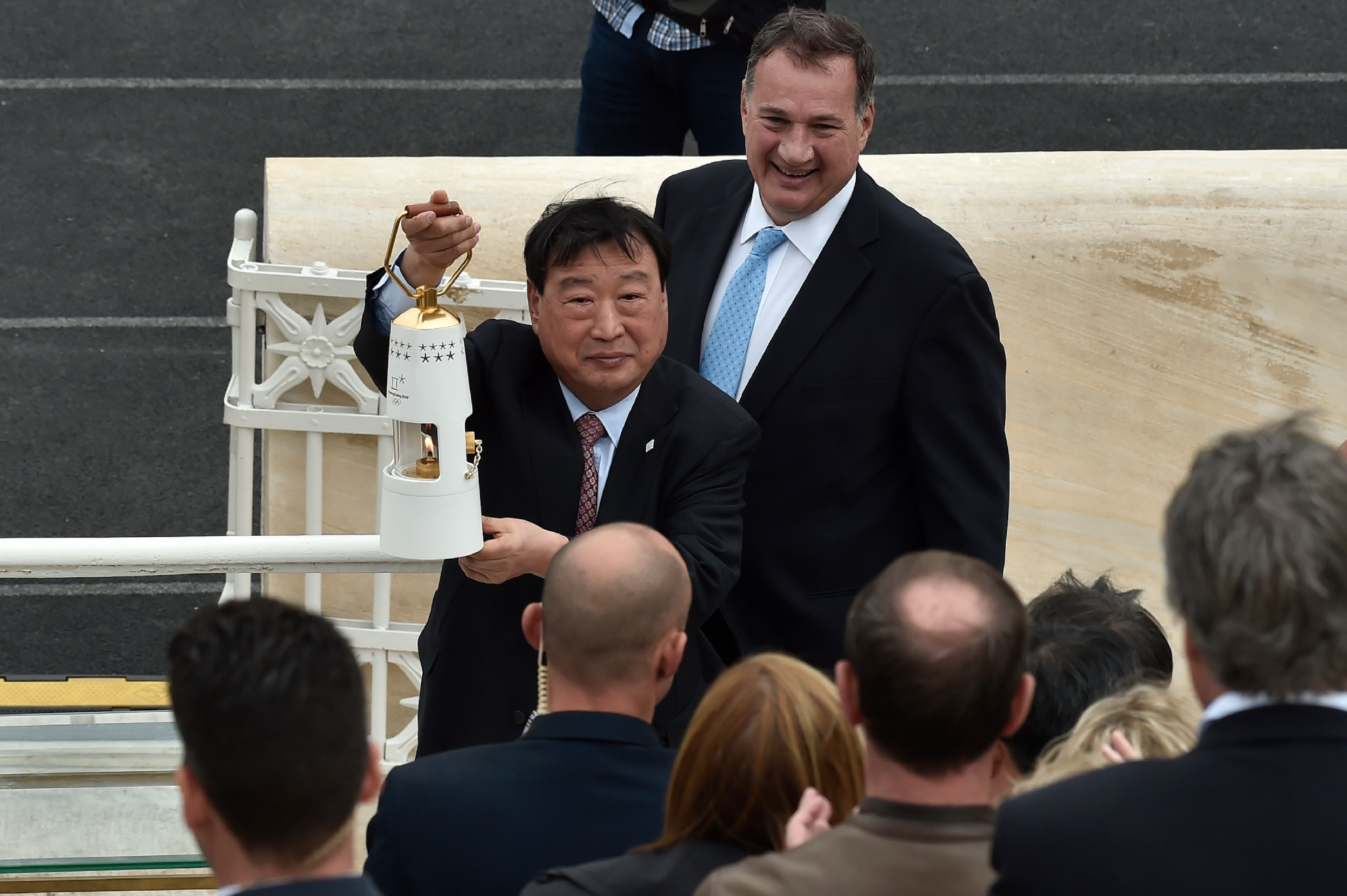 The Olympic flame was officially entrusted to Pyeongchang 2018 here today after an emotional week on Greek soil.

It was left to Hellenic Olympic Committee President Spyros Capralos to bid farewell with the flame now in the hands of the South Korean organisers.

"Carry it to your distant and beautiful country so that it keeps sending the messages of peace, friendship and fraternity throughout its journey," said Capralos to Pyeongchang 2018 President Lee Hee-beom.

"We hope all the Torchbearers who will be carrying the flame in Korea will pass the message that sport can promote peace and make our world better."

The flame was received in a specially designed safety lamp which will be flown to Incheon for the start of the Relay around South Korea.

It is due to start tomorrow marking exactly 100 days to go until the Opening Ceremony of the Winter Olympics on February 9.

"The Olympic flame will be a very special journey that will shine throughout the host nation, for the dreams and passions toward winter sports in Asia," said Lee.

"Pyeongchang 2018 will be an Olympics of peace and harmony."

The flame burned overnight on the Acropolis hill above the Greek capital before making the final journey to the historic stadium here.

A ceremony began with an exuberant gymnastic dance performance by 90 school-age youngsters from a local club, Olympiada Thakomakedonon.

They were the winners of an international competition and their "Wolves and the Moon" performance made for a wonderful beginning to the ceremony which tied in with Halloween today.

Their dance told the story of two warring packs of wolves who ultimately come together in friendship.

By complete coincidence, it bore a striking similarity to a memorable sequence at the Opening Ceremony of the 1988 Summer Olympic in Seoul, the only other time the Games have been held in South Korea.

They too eventually came together and achieved harmony.

He handed it to Greek downhill skier Ioannis Proios, who showed the flame to hundreds of delighted schoolchildren before finally lighting a golden cauldron.

At the far end of the stadium, there was a display of flags of every country which has staged the Winter Olympics since their inception in Chamonix back in 1924.

Giant flags for South Korea and Greece were trooped into the Stadium and were held by young athletes dreaming of one day taking part in the Games themselves.

The ceremony was again attended by the President of Greece Prokopis Pavlopoulos and with him came an escort of Evzones, the ceremonial guards who brought precision to the formal elements of the ritual.

The priestesses of Olympia performed a dance of the nymphs and delighted the crowd by releasing doves of peace as the music came to an end.

It is always a poignant moment when the Olympic anthem is played in a Stadium whose history dates back to 330BC.

Written for the first Olympic Games of the modern era in 1896, it was first sung on the same spot.

Its composer, Spiros Samaras, died exactly 100 years ago and was interred a few hundred metres from the Stadium.

There was also some modern Olympic music.

An international premier for the 2018 Torch Relay song Let everyone shine, performed by husband and wife team "Poppin" Hyun Joon and Park Qe Ri, was played.

They have a reputation in South Korea for sampling traditional folk music and giving it a modern twist and with this Olympic offering they could well have a hit on their hands.

Certainly if there were prizes for athleticism, "Poppin" would have a gold medal already.