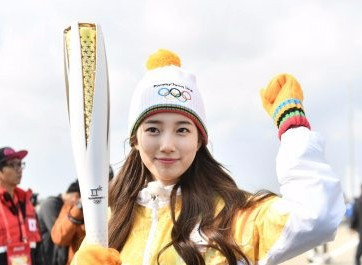 It has been on South Korean soil less than a week but already the 2018 Olympic Torch has made a huge impact as it begins what the Koreans describe as a ‘"special mission".

The Torch itself stands 70 centimetres high, has a separated combustion department, which should protect it against gusts and includes "an umbrella-type cover to shield it from snow and rain" and a "rotational heat energy ignition source".

This, say scientists, helps it operate at extreme low temperatures.

This technology was not needed when skater Yuna Kim touched down with the flame in a safety lamp at the airport in Incheon.

She was greeted with bright sunlight.

After the welcome celebrations on the first day, it headed south for Jeju.

This was where the 1988 Olympic Torch had first made Korean landfall.

Created by volcanic eruptions, it is an area of great natural beauty and was chosen as a UNESCO World Heritage site in 2009.

"Diving gave me new hope and dreams," said Chae Ji Ae, who took the plunge with the flame.

It is not the first time the flame has been taken into the water.

As far back as 1968, Torchbearers swam ashore with the flame at Veracruz as it made its way towards Mexico City and the flame was also taken to the Great Barrier Reef en route for Sydney in 2000.

It might just be the first time that it has been carried by a deep sea exploration robot, though.

The Torch was carried underwater to the "Crabster", developed by the Korean Institute of Research Institute of Ships and Ocean Engineering.

The Torch will have another encounter with a robot next month, at the Institute.

In Jeju, "conscripted" fireman Park Gwang Eun was one of those chosen to carry the flame on its second day.

"Just as a lantern lights the firefighters way in dark and dangerous accident scenes, I hope that Pyeonchang 2018 will be a lantern-like event that shines a light for those who have experienced depressing and gloomy events," he said.

The Torch has been at a 1988 Olympic site already.

The seaborne port of Busan, where sailing took place during Seoul 1988, is considered the home of the sport in South Korea.

Appropriately, the Torch travelled by yacht between the Younghoman Cruise terminal and the Suyeong Bay yachting harbour.

A flotilla of 19 boats escorted the lead vessel carrying the flame.

Back on dry land, the flame was carried by Texas Rangers baseball star Sin Soo Choo in his home town and Amy Williams, the Vancouver 2010 skeleton champion, one of several British athletes invited to take part in the Olympic Torch Relay by TOP sponsor Samsung.

Amongst the runners there was Seo Gwang Soo.

For Seo Gwang Soo once completed 144 marathons in a year and has finished 555 races in the last decade.

With his wife, he has an entry in the Guinness World Records for the most marathons by a couple.

"I will carry out my relay without aiming to set a new record but for completing the relay with a sincere and modest mind," he said.

She also plays the violin and worked as an interpreter when the Asian Games were held in Busan, and again in Incheon 2014.

"In the Torch Relay you should not run too fast or too slow, you have to maintain a balance," she said.

As the first week of the domestic relay came to an end, there was even a celebration on the waterfront at Haeundae Beach.

Before the Torch reaches its next destination, the south-eastern city of Ulsan, those who are with the main Torch cavalcade of 32 vehicles will no doubt be relieved that there is a rest day scheduled, though a mobile display unit will be out and about in local communities to keep the interest going.

It will give them a chance to do their laundry.

They have got 33 on standby throughout the route to make sure everyone always looks pristine.

Yes, they really have thought of almost everything.