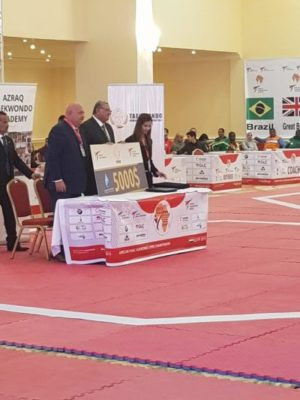 The Taekwondo Humanitarian Foundation (THF) has received a $5,000 (£3,800/€4,400) donation from the President of Egyptian company Al-Shaba, a sponsor of World Taekwondo Africa.

Mohamed Adel Hosni's donation will be used to allow the THF to strengthen and maintain its ongoing and future projects in refugee camps worldwide.

It was made on the sidelines of the African Para-Taekwondo Open Championship in Hurghada and followed Hosni's signing and presentation of a support agreement for the refugee rights project of the THF and Al-Shaba.

Among those present at the ceremony was Farah Al Asa'ad, the Middle East and North Africa coordinator of the THF.

"Each party present at the event stressed the ability that sport can have as a platform for the development of society, and the social responsibility that we have to support refugees and internally displaced individuals to align the values of Olympism and good global citizenship," a THF statement reads.

The Syrian-born fighter is the first black-belt athlete produced by the THF - which works to teach taekwondo to refugees around the world.

He trained at the Azraq Refugee Camp in Jordan after fleeing the conflict in his home country.

Al-Farraj has the dream of being selected as part of the refugee team competing in taekwondo at the Tokyo 2020 Olympic Games.

That could lead to the possibility of sponsorship under the auspices of World Taekwondo Africa.