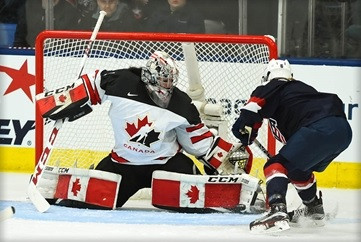 Defending champions the United States put their tumultuous build-up to the International Ice Hockey Federation (IIHF) Women's World Championship behind them as they beat arch-rivals Canada 2-0 on the opening day of the tournament in Michigan.

The American team had threatened to boycott the event on home ice amid a wage dispute with national governing body USA Hockey before it was eventually resolved earlier this week.

The issue dominated the headlines and after the two parties failed to reach an agreement last week, USA Hockey began searching elsewhere for players to ensure they avoided the embarrassment of not fielding a team at their own World Championship.

However, a last-ditch deal was signed, meaning the US women gave up their boycott ultimatum and confirmed they would represent their country.

They shrugged off any doubts over their mindset as they recorded an impressive win over Canada to get their pursuit of a fourth straight world title off to the perfect start at the USA Hockey Arena.

Brianna Decker and Gigi Marvin scored the goals for the American team as they surged to the summit of Group A.

"We're so united, so strong as a group," said Marvin.

"We were itching to be on the ice, and I think we displayed that beautifully, the support on the ice.

"We were couldn't wait to get out there and it was a great first game."

In the other Group A match, Yekaterina Smolentseva's last-gasp goal with less than 50sec on the clock gave them a 2-1 victory over Finland.

After a goalless first period, Rikka Valila put Finland in front before Fanuza Kadirova's unassisted effort in the third stanza.

Just as the contest looked to be heading towards additional time, Smolentseva popped up with a vital strike to give Russia a winning start to the competition.

In Group B, Germany beat Sweden 3-1, while Switzerland overcame the Czech Republic 2-1.

Tomorrow's action in Group A sees the US take on Russia and Canada play Finland.

Germany clash with the Czech Republic and Switzerland entertain Sweden in Group B.