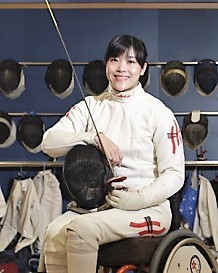 The International Wheelchair and Amputee Sports Federation (IWAS) has revealed the names of the individuals nominated to its Wheelchair Fencing Athlete Council.

"The Athlete Council is made up of athletes with experience not only in Paralympic and World Championship competition, but having personal qualifications and experience in athlete mentoring, journalism, media, tourism, hospitality and TV commentary, and membership of a variety of Board and Councils, to name just some of their collective qualities," an IWAS statement said.

"The Athlete Council will provide the ideal opportunity to have an athlete voice, allowing recommendations and suggestions from the fencers' perspective to be shared with IWAS and IWAS Wheelchair Fencing (WF).

"As well as bringing issues to the attention of the various WF Commissions and Executive Board, they will also be active in communicating decisions and issues affecting athletes across the whole of the fencing community."

The statement added: "We look forward to working with this dynamic team of athletes in the promotion and development of the sport.

"Congratulations to you all."

Having competed in four Paralympic Games and previously being a member of the International Paralympic Committee's Athletes' Council, 33-year-old Yu brings a great deal of experience and knowledge to the Council.

When Yu was 13 years old, she had to have her left leg amputated as a result of suffering from bone cancer.

She was initially training for swimming after her amputation, but switched to fencing at the age of 16.