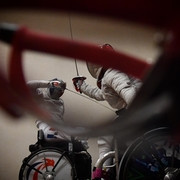 The Italian side made full use of home advantage as they claimed a 45-38 victory against the Russian side in the final at the Hilton Rome Airport.

Poland won the bronze medals after they beat France 45-39 in the third-place playoff.

Victory for the Italian team saw the hosts clinch their third title of the Championships.

Russia were also thwarted in the women's épée team gold medal match as they succumbed to defeat against Hong Kong.

Hong Kong were pushed all the way by their Russian opponents before wrapping up a battling 45-43 triumph.

Poland were denied their second team medal on the fourth day of competition in the Italian capital after they were thrashed by Hungary.

The Hungarians proved far too strong for Poland and cruised to the bronze medal with a 45-26 victory.

Ovsyannikova was in ruthless form as she dispatched the German 15-7 to clinch the world title.

The bronze medals in the division were won by Consuelo Nora of Italy and Ukraine's Hanna Pashkova.

Pashkova's compatriot Serhii Shavkun delivered gold for the Ukraine by beating Sergey Barinov of Russia 15-6 in the final of the men's épée C category.

The Championships are due to continue tomorrow.